This popular tour to Germany combines high speed rail with local and narrow gauge lines that have survived the Cold War and still operate today. Combine the magic of steam travel with stunning scenery and stays in interesting towns and cities.

Mid-morning departure on Eurostar from London St Pancras to Brussels Midi to connect with high speed train to Aachen for an overnight stay at a hotel just a short walk from the station. Evening meal included.

Leaving Aachen after breakfast we travel eastwards to Dresden. We stay 4 nights in this historic city, where our hotel, which is located adjacent to the main station, will provide a city transport pass which is valid for the duration of our stay.

There are two narrow gauge steam lines which are almost within the city limits so we are able to ride both the Radeburg and Weisseritztalbahn and still have time for sightseeing. Built in the late 19th Century these steam railways survived the Cold War and are still in daily operation. The Weisseritztalbahn is considered to be the oldest public narrow gauge railway still in operation in Germany.

We travel by rail a short distance from Dresden to the nearby Czech border and arrive in Zittau to find another line which has survived. Steam hauled, it operates two branches to Kurort Oybin and Jonsdorf and we plan to travel on both before returning to Dresden in the afternoon.

A full day out beginning with a journey on the main line railway towards Chemnitz. We travel as far as Flöha then take the branch line to Cranzahl. Once there we find the steam train waiting to take us on the trip to Oberwiesenthal. Travelling through forest and upland scenery, the end of the line is in sight of the Czech border. Return this afternoon to Dresden by the same route.

Day 6 – Stralsund and the Baltic Sea

Travelling via Berlin we transfer to Stralsund which was once the second most important Hanseatic port and has a long association with the sea. Our hotel is located in the town centre and we stay here for 3 nights.

From Straslund we take a short journey westwards via Rostock to Bad Doberan, the home of the line affectionately known as the Molli. The rail route travels through the streets of Bad Doberan to the coastal resort of Bad Kühlungsborn. We will have free time for sightseeing before returning to Stralsund.

The island is a favourite seaside destination for German tourists and the railway with its steam trains is an important attraction. Nicknamed ‘Rasender Roland’ ("Rushing Roland") we have time to explore the whole line before returning to Stralsund.

Day 9 – Inland to the Harz Mountains

Travelling on the main line we make our way to the lovely old town of Wernigerode. The town is full of half timbered buildings which have been lovingly restored and positioned high above the town is the 12th Century Castle. Wernigerode is the northern terminus of the Harzquerbahn and we stay here for 4 nights in our well appointed hotel in the main square.

The HSB (Harz Narrow Gauge Railway) is the biggest network on this tour with over 100km of running lines from Wernigerode south to Nordhausen and east to charming Quedlinburg, a UNESCO World Heritage Site. We include a Harz Rover Ticket for unlimited travel on the network and your tour leader will offer an optional escorted excursion each day to ensure that you cover the complete line, including a trip to the top of the Brocken by steam train. The Brocken was strategic in the Soviet era due to its position and served as a “listening” post. Today there is a museum at the summit telling the story.

Time to leave the mountains behind and head west to Düsseldorf. Our hotel is close to the station, where we stay for 2 nights.

Day 14 – Wuppertal and the Schwebebahn

The Schwebebahn or hanging railway which runs along the Wupper Valley in the Ruhr is quite unique – its wheels are on the roof! Built over a century ago, this monorail straddles the river and is not only a popular tourist attraction but an integral part of the region’s transport infrastructure.

After a leisurely breakfast we take a morning train via Cologne to Brussels where we finally connect with the Eurostar service to London St Pancras, arriving late afternoon. 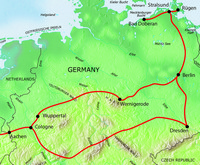