Continuing with our series of tramway tours, we re-run this much anticipated trip to Italy. A comprehensive rail holiday that takes in Milan and Turin’s large tram networks before heading south to Rome and Naples to sample their smaller but interesting routes.

Lunchtime Eurostar from London St. Pancras International to Brussels where we connect to high speed train to Cologne for an overnight stay. The hotel Ibis am Dom is found in the station building under the shadow of the medieval cathedral.

From Cologne we follow the route of the Rhine south until we cross into Switzerland at Basle. Changing trains here, we head south through Switzerland and under the Alps to Bellinzona located in the Ticino valley. We stay here for 1 night.

A short rail journey takes us to Milan and our hotel is a short walk from the station. We will store our luggage at the hotel and spend the rest of the day exploring Milan’s 18 line tram network which covers 113 miles. Afterwards we check in to our hotel where we stay for 3 nights.

A full day to explore Milan's extensive tram network not covered yesterday. The tour leader will lead an excursion to ensure we travel over as much of the network as possible between yesterday and today.

To Genoa to spend the day riding its small tram and metro network. We also find a funicular and rack railway in the town. Making time to enjoy the cities transport sights and sounds we return to Milan in the late afternoon.

A leisurely morning before an afternoon departure to Rome on the Trenitalia’s flagship Frecciarossa high speed train. Our hotel in the capital is located close to the station with easy access to Rome’s public transportation system. We stay here for 3 nights.

A full day exploring the transport system of Rome, which has 6 lines and 192 stations forming a rail network of 24 miles. Once the largest network in Italy, Rome’s tram system is a shadow of its former self having various lines replaced by bus routes in the 1930s, 50s and 60s.

According to legend Romulus founded Rome in 753 BC. However archaeological evidence shows human occupation from at least 5,000 years meaning Rome is one of the most continually occupied cities in the world. We enjoy a free day to explore Rome further; alternatively the tour leader will lead an optional excursion to the Rome Porta San Paolo Railway Park Museum.

We travel to Naples and arrive in time for lunch before we take a journey on the Circumvesuviana line to Sorrento. This 950mm narrow gauge line covers a total of 88 miles over 6 routes which circumvent Mount Vesuvius. The line we are interested in today is the 29 mile line to Sorrento. This line, which opened in 1932, takes just over an hour to travel end to end and consists of around 36 stations. We return to Naples for a 2-night stay.

A free day in Naples to ride its three tram routes and visit the Italian National Railway Museum on the outskirts in Pietrarsa. Originally operated by horse drawn trams the standard gauge tram network, which now covers slightly more than 7 miles, opened in 1875. Travel to Pietrarsa is included in your Pass, entry to the museum is payable locally.

This morning we take a direct train to Turin arriving early afternoon. The rest of the day can be spent riding Turin's trams. This network covers 55 miles over 10 lines on slightly wider than standard gauge rails. When originally opened in 1871 the line was horse drawn, but was electrified in 1893, now the network is powered by 600v overhead DC.

A free day in Turin where you can continue to ride the trams. There is also an option to take the short train journey to Savigliano to visit the Piedmont Railway museum which houses a variety of steam locomotives, railcars, passenger and freight rolling stock and includes a roundhouse. Travel to Savigliano is included in your pass and entry to the museum is payable locally.

We take a mid-morning TGV direct to Paris arriving late afternoon and transfer to our hotel which is located close to Gare du Nord for our final overnight stay.

After a free morning we take a lunchtime Eurostar back to London arriving mid-afternoon. 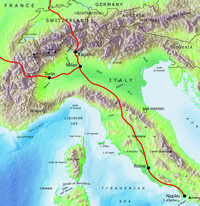 Trams and Trains of Italy