Tailor this tour for independent travel

Follow the route of the “Romantic Road” by train from Würzburg in the north to Füssen in the south of Bavaria. Continue into Austria and visit the best known Castles and Palaces of King Ludwig. Our travels also include a rack railway and cable car to the summit of Germany’s highest mountain, Zugspitz.

Lunchtime Eurostar from London St. Pancras International to Brussels Midi where we connect to high speed train to Cologne. We overnight at the hotel Ibis Cologne am Dom which is ideally situated in the station building under the shadow of the Medieval Cathedral.

From Cologne we follow the route of the Rhine south as far as Frankfurt before turning east and cross the country to Nuremberg. Arriving mid-afternoon allows time to explore the city or visit the German National Railway Museum (which grants free access with your InterRail pass). We stay in Nuremberg for 4 nights.

A day trip to Würzburg, the starting point of the “Romantische Strasse”. Würzburg sits astride the river Main, a tributary of the Rhine. It’s most notable sites are the Residenz and the fortress of Marienberg on the banks of the river.

Today’s excursion is a trip to Nordlingen which includes a visit to the Bavarian Railway Museum where we plan to take a steam train ride on the museum’s 40km railway.

An excursion to Rothenburg ob der Tauber on the Romantic Road. Rothenburg is a well preserved example of a medieval town located on a plateau above the Tauber river. The town is surrounded by a town wall. It has many classic preserved buildings, especially the Rathaus and Ratstrinkstube where, on the hour, the clock chimes and figurines re-enact the legendary story of the brave mayor who drank nearly a gallon of wine in order to save his city.

This morning we move on to Füssen via Augsburg and Buchloe. Füssen marks the end of the Romantic Road where it meets the foothills of the Alps. We spend 2 nights here.

A full day exploring Füssen with two castles to visit, Hohenschwanhau, close to the town centre and Neuschwanstein Castle. Neuschwanstein was commissioned by “mad” King Ludwig on a peak overlooking the town of Füssen but he never actually saw it in its completed form.

After breakfast we make our way via Munich into Austria for a 4-night stay in Zell am See. The town of Zell am See can trace its history back to the Roman times and in the winter is used as a base for skiing down the nearby Schmittenhöhe mountain.

A round trip tour today starting from Zell am See to Innsbruck, where we take the train south into Italy via the Brenner Pass. On arrival in Fortezza we turn east and head back into Austria crossing the Border at San Candido. At Lienz we change trains again and head to Spittal Millstättersee, then north up the main line to Schwarzach St Veit and finally back west to Zell am See.

Today we travel to Jenbach to make a return journey on the 760mm narrow gauge steam railway the “Zillertalbahn”. There is time in Mayrhofen for lunch before a return trip to Jenbach. We return to Zell am See for a free afternoon. In Jenbach there is the Achenseebahn, a metre gauge steam rack railway to Lake Achensee. This railway went into insolvency in 2020. There are plans to reinstate it and if successful we will make a return trip before the return journey back to Zell am See.Jenbach is the only place in Austria where three different gauges meet!

After breakfast we leave Austria and head to Munich arriving at lunch time. The afternoon is free to explore the capital of Bavaria. We stay in Munich for 2 nights.

Day trip to Garmisch Partenkirchen by train to take the electric rack railway and cable car to the summit of the Zugspitz, Germany’s highest mountain. Return to Garmisch and then to Munich by rail.

Today we leave Bavaria and start our journey home, travelling via Frankfurt to Aachen for our final overnight stay.

We take a high speed train back to Brussels and onwards to London. 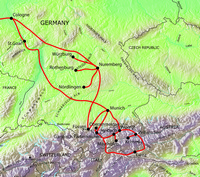