Facing Forwards: Europe. Solo. No Looking Back by Lorraine Wilson

We are delighted to introduce a female author to our list of Recommended Railway Reads. Over three months, freelance journalist Lorraine Wilson, travelled solo through Europe by train, stopping at 57 destinations in 21 countries and covering 11,500 miles. The result was her delightful book, "Facing Forwards: Europe. Solo. No Looking Back". This railway and life-changing odyssey followed in the footsteps of a financial meltdown, heartbreak, bereavement, and poor health over the previous five years. At the age of 48, single, childless and having sold her home Lorraine was struggling to decide where her life was heading. In the end the best thing to do, she thought, was to head off into the unknown! Facing Forwards is the result - not a conventional travel book, but a journey of self-discovery over one summer with lots of memorable encounters along the way. Below is an excerpt from the book which finds Lorraine in Slovakia and, like most of her journey, chronicles her experiences off the rail tracks as well as on them. 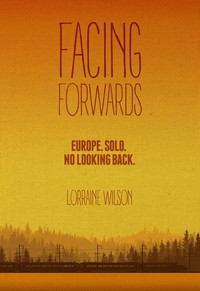 For too many years I had planned to visit Bratislava via budget airline, but now I was leaving the station and smiling at a massive Welcome to Slovakia banner. The station was basic and far from aesthetically pleasing, but this large plastic banner was enough to know that the five-hour journey to get here was worthwhile.

An apartment had been booked and, according to the map app, it was 10 minutes’ walk from the station. That didn’t account for a strange tangle of flyovers that sent me up a set of stairs and along some abandoned tracks with rusting carriages. It was also in the opposite direction, but at least past mistakes had taught me to tackle it early rather than wander aimlessly.
Heading back and under the strange flyovers, the apartment really was 10 minutes’ away. With no sign of the owner, I called the number on the e-mail and was told that his daughter would be there in five minutes. She was, in the company of a small Jack Russell Terrier, and if she thought I was an oddball I couldn’t blame her at all. While she was trying to show me which keys opened which doors I was on all fours, nuzzling the small dog and only half-joking that I would offer her more money if the dog came with the apartment for the night.

Booking a privately owned apartment meant an early check-in and a longer day in the city. Flying (or training) by the seat of my pants had led to some regrets but mostly it was paying off, with the most exhilarating experiences coming from general meandering and having no day-to-day itinerary. An hour into this latest urban safari, Bratislava already lived up to my expectations for no other reason than it gave me that all-encompassing sense of well-being.

Then, walking through a charming courtyard, with galleries above, I could hear music. In the far corner someone was playing a piano. As I drew closer, he paused after finishing a classical piece. Then there were the unmistakable chords that introduce The Winner Takes It All by ABBA. The distance between my position and the piano provided just enough time to make the decision to do what my friend Ali encouraged me to do before leaving – sing songs. As the intro ended, there was the song’s natural pause, and the young pianist must have been surprised to hear “I don’t wanna talk…” the song’s opening line. He looked up, slightly bemused but seemingly delighted. As we carried on together we stumbled in places but managed to get back on track. It was intoxicating. I’m sure the vocal performance wasn’t great, with rusty pipes and the high notes cracking, but I couldn’t have been happier. It was totally freeing being able to sing without judgment, away from everyone I knew, and doing something that never fails to bring me complete happiness. 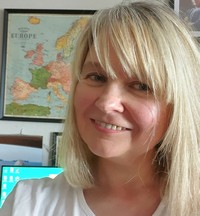 Those few minutes now provide an official happy place for dark days. The small square, the white buildings against a blue sky, the day being warm but not too warm, the fact that I walked into the square at the exact moment that the pianist decided to play one of my favourite songs – and one that I could make a decent stab at. A crowd had gathered, but I was concentrating on this shared experience with a great musician. At the end he stood up and there was a quick hug – he spoke no English; I obviously spoke no Slovakian – but for a few moments we were connected by the shared language of music.

Lorraine is currently recording an audio version of the book for Audible which will be released on 5 September 2020.

When you subscribe to the blog, we will send you an e-mail when there are new updates on the site so you wouldn't miss them.

Maria Cook has not set their biography yet

More posts from author
Friday, 07 August 2020 Lost Railway Journeys from Around the World
Saturday, 04 July 2020 Getting to Know our Travel Team
Wednesday, 17 June 2020 On the Slow Train by Michael Williams